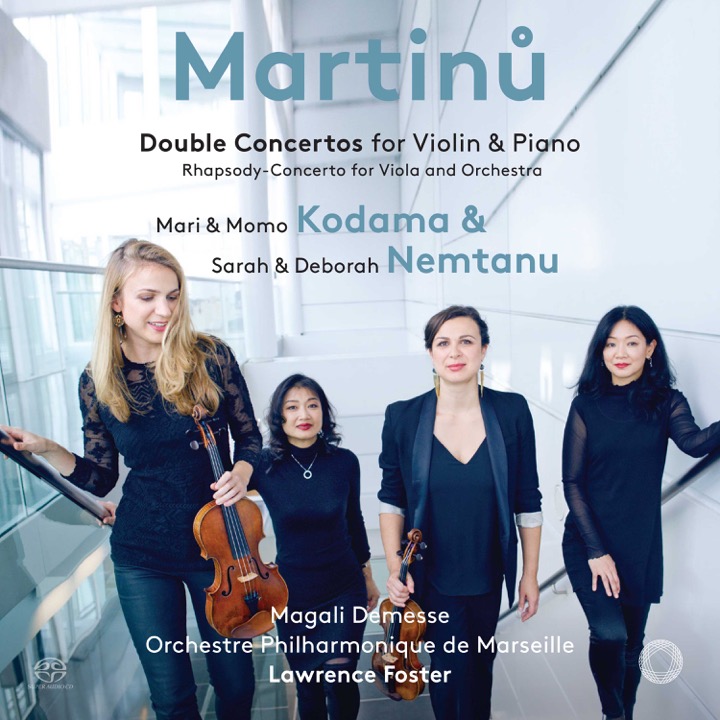 Bohuslav Martinů’s distinctive musical voice, which infuses the great Czech tradition with modern idioms, is showcased in this captivating survey of his concertante works, performed by the Orchestre Philharmonique de Marseille conducted by Lawrence Foster.

The Concerto for Two Pianos and Orchestra is a lively and rhythmic tour de force. Breezily energetic and relentless, it is full of jazzy inflections and high speed fireworks, pausing only in the tranquillity of the slow movement for moments of serene calm. By contrast, the Concerto for Two Violins and Orchestra is a warm, lyrical work in the Romantic tradition. With its intricate and interweaving solo lines, expansive melodies and dance-like syncopations it’s an engaging work of considerable charm which deserves a wider audience. The Rhapsody-Concerto for Viola and Orchestra is a dreamily nostalgic work whose simple melodies, radiant lyricism and soaring viola line make it one of the 20th century’s most performed viola concertos.

The disc as a whole is another unmissable addition to the Martinů discography. Read more

Deborah and Sarah Nemtanu are the skittish violinists, Mari and Momo Kodama the battling pianists, and the viola soloist in the Rhapsody is Magali Demesse. Lawrence Foster, the conductor, never lets the Orchestre Philharmonique de Marseille slacken. A triple portrait of a still-undervalued composer makes this a rewarding disc.

This jam-packed recording presents three of his most scintillating works. If they don’t convert you to Martinu, nothing will. (...)
The Nemtanus, a more athletic pair, capture an edgier eroticism, a whiff of danger in the game of love. Read more

The latter work is played with bags of charm and considerable flamboyance by the Franco-Romanian Nemtanus, Deborah and Sarah, sweet if a bit lightweight in tone, exactingly precise in all those exposed bravura passages in parallel harmonies, and relishing the neo-Baroque flourishes with which Martinů peppers the score. There’s dash and verve in the opening movement, a slightly barbed elegance in the Moderato, where they vie with each other for the principal melody, and real exhilaration in the final sprint for home. Above all, they sound as if they’re really enjoying themselves with it. Read more


Concerto No. 2 in D Major for 2 Violins, Poco allegro