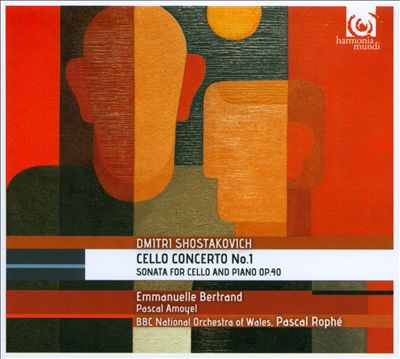 Here are two masterpieces for cello by Shostakovich, written 25 years apart. The insolent Sonata op.40 of 1934 – contemporary with Lady Macbeth of the Mtsensk District, the opera soon to plunge its composer into disgrace with Stalin – was answered in 1959 by the bitter self-questioning of an artist who seemed to have sunk into depression. This Cello Concerto ends with a wicked caricature of true joy, adding the final touch to the extreme polymorphism of a traumatised humorist who had long since learned not to laugh . . .

[a] clear recording with a forceful narrative, building up great intensity into the fleet-footed finale, where she [Bertrand] is incisively partnered by the BBC National Orchestra of Wales [...] Masterfully partnered by Pascal Amoyel, she adeptly combines the forces of irony and fantasy in the second Allegro of the Sonata. But it is the hauntingly eloquent suffering of the Largo where both players are most evocative.

Bertrand is nothing if not a gutsy player. The close-up recording captures her every breath and every rasp of bow on string. Pascal Rophe makes sure that the BBC NOW responds in kind [...] If she is as good live as she sounds here, and if she is as full of insight in the rest of her repertoire, I would certainly travel a distance to hear her [...] The Sonata, too, with Pascal Amoyel as much accomplice as accompanist, is individual without ever sounding forced. Bertrand gives us one of the dreamier accounts of the first movement and one of the most reined-in of the scherzo.

[Bertrand] wears the piece lightly, dancing rather than carving through it, with a silvery line that can be ghostly or piercing but never gruff [...] her bright, neat staccato is effective even if climaxes lack heft [...] The BBC National Orchestra of Wales under Pascal Rophe, however, really does dance on hot coals and give the requisite blast [...] [the Moderato in A minor] has a haunting poetry and one can hardly imagine it better played ***