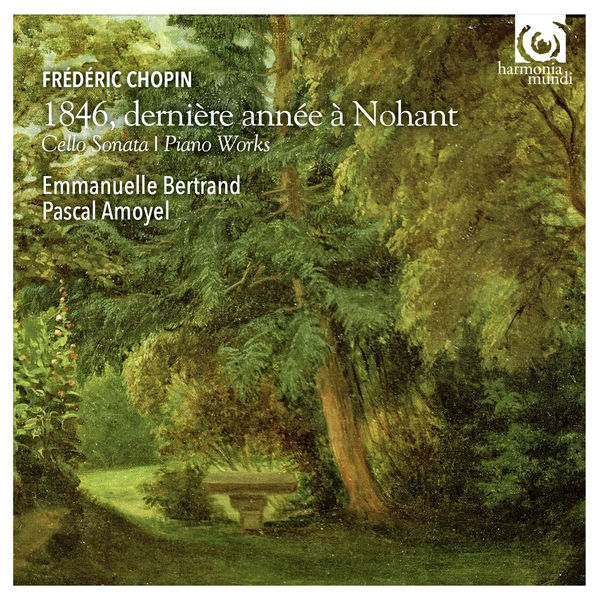 1846: the last summer that Chopin was to spend on George Sand’s estate at Nohant, where he had composed or completed the core of his œuvre over a period of seven years. That summer saw the birth of his last miniatures and of some more ambitious pieces: the Barcarolle, the Nocturnes op.62a, and of course the Cello Sonata, the very last work published in his lifetime. Pascal Amoyel and Emmanuelle Bertrand plunge us into the heart of those few months before the couple’s separation; the ailing Chopin did not yet know that he was leaving his musical testament.

[...] the performances here are very fine. Bertrand and Amoyel deliver a deceptively laidback performance of the Cello Sonata that brings out the structure of the first movement, which so puzzled Chopin's contemporaries; the germ of all the material in the opening melody is clearly traced. Amoyel on his own brings a sense of exhaustion to the two nocturnes, but does not try to impose it on music where it doesn't belong. Read full article

Cellist Emmanuelle Bertrand joins Pascal Amoyel for the Sonata for Cello and Piano, Op.65 with a beautifully restrained Allegro Moderato that has a fine natural balance between the two instruments. Emmanuelle Bertrand slowly pulls more power from the music, both these artists finding many subtleties with this cellist providing some fine textures and timbres as the movement progresses. These two make a terrific duo, both bringing a real passion to this music [...] The Scherzo: Allegro Con Brio brings some fine interplay between these artists with terrific control, rubato and sense of rhythmic subtly. At times these two players bring a lovely singing quality to the music. Emmanuelle Bertrand brings the most exquisite, deep rich, glowing textures to the Largo, glorious playing, with Amoyel providing a gently supportive flow: superb [...] This is a release not to be missed.

Their performance manages to fashion a perfectly lucid path through the musical thickets of the sonata’s first movement, which can sometimes seem too overloaded with invention. If the other three movements are more straightforward, the two players never forget that this is a work for musical equals, and the give and take between them is exemplary [...] The rest of the disc is devoted to solo piano pieces, and in the most part Amoyel’s playing of those is equally perceptive.[…] especially the otherworldly magic of the two nocturnes Op 62, with their effortlessly sustained melodies and unexpected harmonic side-slips. It’s a lovely anthology, beautifully thought out and always executed with perceptive care.