Under the reign of Suleiman the Magnificent, the Ottoman Empire was at its height: both its army and its janissaries were feared throughout Europe and Istanbul filled the Western World with wonder. For Suleiman, the “Sublime Porte” was of strategic importance for several reasons: not only did it allow commercial exchanges and wars but it made it possible for the eastern and western cultures to discover each other. First, those two worlds were indifferent, and they gradually became more and more curious of each other. The result was a reciprocal fascination.

Aashenayi (“encounter” in Persian) reflects this cultural richness. It invites the listener to a journey to the edge of ancient and traditional music. Echoes of Persia, Turkey and Europe mingle with the music of the singers and instrumentalists of the ensemble Canticum Novum. Each performer is dedicated to continuing a strong musical tradition while making it accessible to all. 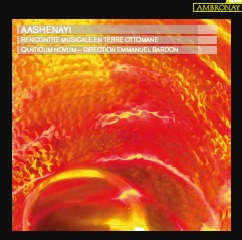 During the reign of Suleiman the Magnificent, in the sixteenth century, the Ottoman Empire was at its zenith. Its army and its janissaries were feared throughout Europe, and Constantinople, its capital, was the wonder of the western world. The empire was a welcoming haven for the Sephardic Jews expelled from Spain, and a crossroads for the populations of the whole world. The Silk Road, the path of the Gypsies, of the nomadic peoples, all passed here. For Suleiman, as a patron of the arts and literature, the Sublime Porte not only possessed a commanding strategic position for trade or warfare; it also had a vocation to bring together the cultures of East and West. At first indifferent, the two worlds grew curious about each other, seduced, indeed fascinated, and finally open to reciprocal influences.

Thoroughly immersed in the historical context, we have chosen pieces of music that bear witness to this incredible intercultural wealth. The programme of Aashenayi (‘encounter’ in Persian) offers a voyage of exploration that constantly shuttles back and forth from one world to the other and demonstrates their mutual curiosity and fascination. A programme that reflects the situation of this transit point par excellence, where echoes of Persia, Armenia, Turkey and Europe intermingle. A programme served by artists who draw on their own musical heritage to play the repertory of the Other, thus giving birth to a common expression.

Aashenayi brings together a selection of monophonic songs derived both from the oral tradition (the Sephardic and Persian pieces) and the written (the Ottoman, Armenian, and Spanish pieces). The choice of instrumentation and the elaboration are the fruit of collective effort, and our interpretation gives a key place to improvisation. Nevertheless, this programme is not a historical reconstruction but above all a musical encounter in the present day. The musicians of this recording, with their multiple origins (Armenian, Turkish, Kurdish, Afghan, Algerian, French), have all chosen to share this human experience for many years now as part of the group constituted by the ensemble Canticum Novum. It is the simple act of sharing a collective gesture of our everyday lives in which each of us, while respecting his or her difference, finds a common point to enter into contact with the other: oral expression. This orality, however different it may be according to its origins, expresses and transmits a memory, an experience, a culture. Orality establishes a dialogue. But before that dialogue can take place, it is important to make silence in order to listen to the Other.

At a time when the world shows more signs of isolation than of open-mindedness, of identitarianism than of interculturalism, when priority is increasingly given to the particular interest to the detriment of the collective, when our economic policies generate divisions between human beings and inequalities are more and more marked, it is more necessary than ever to ask ourselves the place we wish to give this ‘orality’ in our society.

The practice of the arts, the guarantor of this expression, is part of life. It ought to be as simple and obvious as the everyday acts we share in our communities: working, going to school, sharing a meal, playing, entering a mosque, a synagogue or a church . . . Let us continue to build bridges between past and future so that the practice of the arts, and of music in particular, can continue now and forever to encourage dialogue, discovery, friendly exchange, and inquisitiveness. The perpetuation of the human adventure can only begin with encounters . . . Aashenayi . . .


Inspired by the Armenian tradition